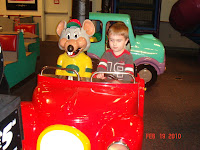 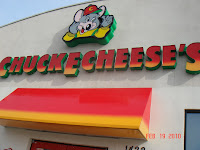 We just began our Winter break - we only get a Friday and a Monday off - but I am trying to make the best of it - we went to the eye doctor yesterday and he highly suggested we go back to having Brextin wear his glasses (we have another eye doctor who is against him wearing them) - this doctor really thinks it will help him in the long run - and said he was pleased with how he responded to some of his tests- and thinks there was improvement -
After the appointment I took my oldest along with my mother to ChuckE Cheese's - he had a blast and I must say so did I- some of the games were pretty fun. We use to have a ChuckE Cheese here locally about 15 years ago - but it went out of business so we had to travel 80 miles to locate the nearest one.
Then when we got back my mom offered to keep our oldest for a sleep over - so we had the night alone with Brextin - we watched two movies and some of the Olympics and were able to sleep in a little.
Then my husband escaped to the gym for his 4 hour "away" time - still waiting for mine - which never comes - however while he was gone - I re-arranged Brextin's bedroom and wanted to make more room for our exercise mats that we keep downstairs - I am hoping to do more therapy upstairs - and I thought if I moved up some of his mats I would be encouraged to do so. Plus I thought his walkers would move more smoothly on the mats rather than the carpet. We are hoping that this will be the year that he will begin to walk - our fingers are crossed and our prayers have been said.
Today is the day that we dropped his Vigabritran down to 250mg - he use to be on 1000mg - and currently he has been handling the 500mg just fine - so we pray that the wean continues to do well.
Earlier this week - we had a scare - we went in to wake Brextin up in the morning - and found him laying in a pool of blood by his head- we found out he bit his tongue - it was quite severed 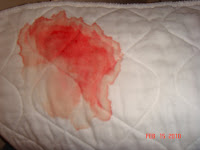 - right in the middle - the strange thing was that he wasn't in any pain and it didn't bother him - I still am amazed as to how it happened and why he wasn't in pain.
Posted by Brextin's Hope at 1:15 PM