A website called - "My Child Has Wings" made this for me! 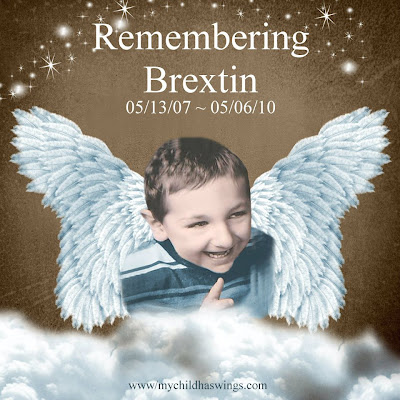 We hit the paper again! 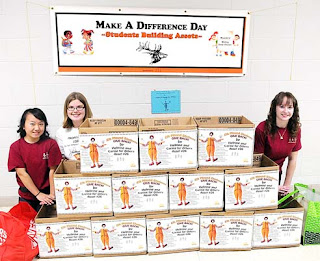 Elk Mound High School students and members of the group Students Supporting Students will be collecting donations for Ronald McDonald House in Rochester, Minn., and Faith Lodge in Danbury.

When Emily Stokke decided as an Elk Mound High School freshman she wanted to get more involved in her community, joining Students Supporting Students seemed like a no-brainer.

Three years later, Stokke, now a 17-year-old high school senior, can rattle off a number of activities - such as promoting safety among young students and buying gifts for needy families - she has taken part in during her time with the high school group that helps students and community members.

"I think it's so much more rewarding going shopping for others," Stokke said about the group's holiday shopping effort, her favorite of the organization's many activities.

These days Stokke is SSS co-chairwoman and is preparing for the group's next opportunity to make a positive difference. Beginning Monday, the group will collect items for charities in Minnesota and Wisconsin that supported its adviser, Randi Stanley, during her son's illness and after his death.

Stanley's son, Brextin, died in May 2010 before his third birthday after a 2007 diagnosis of infantile spasms, a rare form of epilepsy. During Brextin's medical treatments and after his death, the Stanley family received extensive support from Ronald McDonald House in Rochester, Minn., and Faith Lodge in Danbury.

"We always encourage the kids to do and act out what (they have learned through SSS), but this time we're actually putting forth something extra," said Stanley, who is one of the group's advisers and works as an Elk Mound business and information technology teacher.

Since 2001, Students Supporting Students has been an active organization at Elk Mound High School that focuses on asset-building, Stanley said. Asset-building centers around 40 developmental assets, such as integrity and social justice. This month group members are finding ways to help others.

"We are basically a group that focuses on giving back to others as you would unto yourself," Stanley said, adding that more than 90 high school students are involved.

SSS members are encouraged to lead by example and to make happy, healthy decisions. The organization is made possible through grants, which Stanley's fellow adviser, Peggy Bodenburg, writes. More than 90 students are involved.

Stokke said she has grown as a person through her involvement in the organization.

"I'm learning to be a lot more helpful to others and not be afraid to lend a hand to those in need," she said.