Here are some great photos of Brextin eating! 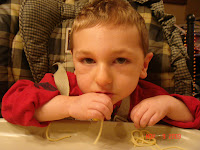 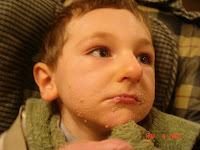 Brextin has begun to grab the spoon as we try to feed him - or often he decides to place his fingers into his mouth while it is filled with food and then we end up with food everywhere - in this photo Brextin was eating the pureed meat dinner - which ended up all over his face.
In the other photo - Dad decided to try to feed him noodles and I was quite impressed on how well he played with them and then placed them into his mouth - he didn't end up eating a ton of them - but it was nice to see him play with his food - I thought I would never say that.
ooh ya - how do you like his new hair cut - it is the shortest we have ever had it - I miss his curls on the top - however they should grow back shortly.
Here is a video of him with the noodles . . .
Posted by Brextin's Hope at 8:55 PM